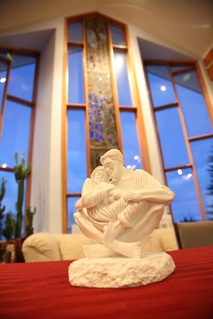 Zion Evangelical Lutheran Church is a body of believers in God the Father, God the Son, and God the Holy Spirit. We are a Christian church, gathered around and strengthened by God's Word—the Bible—and His gifts of Holy Baptism and the Lord's Supper. We confess the Christian faith in the words of the Creeds and as explained in the Lutheran Confessions.

Zion, located in Wetaskiwin, Alberta, is the largest of eight Lutheran congregations, of various Lutheran groups, in the County of Wetaskiwin.

Through the missionary zeal of Rev. Emil Eberhardt, a small group of German immigrants founded our congregation (as a congregation of The Lutheran Church–Missouri Synod) on May 20, 1904 with just eight charter members. Zion's first church building was a gothic-style church, dedicated in 1911. A new building, designed by Canadian Lutheran architect Fred Klingbeil, was dedicated in 1966. In 1988 Zion joined the newly-formed Lutheran Church–Canada. Currently, our congregation has 422 baptized members and 331 communicant members.

Located 72 kilometres south of Edmonton, Alberta, the city of Wetaskiwin is both a centre of light industry and agriculture and also serves as a satellite community of Edmonton.

Pastor Timothy Richholt was born and raised in Bismarck, North Dakota.  He graduated from Bismarck High School in 1972.  After several years, in the grocery business, Tim became convinced that the Lord was calling him into full-time ministry.  In the fall of 1975, Tim entered Concordia College in St. Paul, Minnesota where he earned a liberal arts degree with a major in Biblical Languages in May of 1978.  He took his seminary training at Concordia Seminary in St. Louis and graduated in 1982.  Pastor Richholt and his family moved to Cheyenne Wells, Colorado, where he served for six years as pastor of Grace and Trinity Lutheran Churches in Cheyenne Wells and Kit Carson, Colorado.  In May of 1988, he became pastor of Immanuel Evangelical Lutheran Church in Rocky Mountain House, Alberta, where he served for 16 years.  Pastor Richholt then served as Pastor in Trinity Lutheran Church in Billings, Montana for 10 years.  Pastor Richholt was installed as pastor at Zion Lutheran Church in Wetaskiwin, Alberta on February 9, 2014.

While in Colorado, Pastor Richholt was also on the district board for Social Services.  In Canada, he was chairman of the Board for Parish Services for Lutheran Church-Canada for nine years.  He has also served as circuit counselor and as L.W.M.L. zone counselor.

Pastor Richholt married Melissa Unterseher in 1971, and together they have four sons and four grandchildren.